“Education without values, as useful as it is, seems rather to make man a more clever devil.”

Resources in order of this SPECTRUM Acrostic

I now truly understand why it’s so crucial to bring in the concept of thermal energy immediately after states of matter, especially before phase changes and chemical reactions. One of my favorite things about NGSS is its emphasis in teaching the nature of molecular movement and the spaces between the molecules, in solids especially. This may be present in other curricula pre-NGSS, but it’s formally scaffolded in the NGSS Middle School Physical Science standards. It makes teaching states of matter so much more concrete, and the cognitive transition as to why energy is exchanged as a result of the space and movement in between the molecules was like science education nirvana this week. Again, I understand this may be an age-old approach to sixth grade chemistry and I’m not arguing that any of this is new. But joining in on a newly NGSS aligned curriculum knowing this phenomenon has been addressed gave me (the teacher, not the curriculum writer) solace. Also, I’m finally able to see more than a day or two into the teaching schedule and am doing some advanced organization. I was able to show my team how I’m embedding students’ individual labs into their quarter projects, combining some labs to treat as one weekly project, and work closely with my peers on the order in which we introduce vocabulary so the entire 6th grade body has a consistent and equitable experience.

Congratulations to this year’s Nobel Prize Winners! Also, happy International Observe the Moon Night! We didn’t have visibility here, but I assigned it as homework this weekend and am excited to see and hear what my students come up with.

At last! Student discourse! It was brilliant, well-timed and nearly organic. As we transitioned from States of Matter using this simulation to Thermal Energy, we started one of three investigations using heat and ice in water. The first uses a sequence of ice cubes in the same volume of water to measure the effect of ice on the temperature of water. The same molecular movement they sketched observing different states of matter (solid, liquid, gas) is the technique they used for sketching the different beaker temperatures (a little ice, some ice, a lot of ice). Can you tell I’m excited about that cognitive leap of faith? This means that they can now describe all energy transactions through moleculer movement! And they did! Granted, my most advanced class was first to make the jump, and when hands started shooting up in the air and my randomizer for calling on students (a cup of numbered popsicle sticks) could not keep up, I knew my cue had arrived. Take a moment to write down your reason why the temperature change of each beaker is different, then when you hear this bell, turn to your shoulder partner and discuss this. After one minute, I’ll call on random partners to tell us what the results were. All classes got a shot at it by the end of the week. It was Think-Pair-Share as its best (as of right now), and it was beautiful.

Another win this week was finally being able to actively work with my 100% Spanish speaking students. I have three in one class and fortunately the class size is small with some willing translators. I do what I can to translate vocabulary on a word wall as well as gesture/point to what needs to be done, and they are patient with my attempts. I don’t have a printer or would otherwise be printing every term with a picture in both languages (this makes me tremendously sad). Unless I’m mistaken, there is little to no curricular support or ongoing PD for this audience. I have some resources using quality stems that I’ll hunt down and begin implementing as soon as I am able. For the ice measurements, I called on them to be in the action by taking temperature using a Celsius thermometer and keeping time. Having an 11-year old tell you that 16 degree tap water is dieciseis to answer my obvious gesturing and embarrassing inability to count past fifteen in Spanish, with a smile to boot, is kind of cool (pardon the pun). I have a long way to go, but at least they know I’m trying.

This week, we revisited the criteria and constraints for their quarter projects on making proposals to be a Special Effects intern. They will use all of these cool labs, like the crystals and states of matter investigations, to create an interactive storyboard proposing their special effects abilities to make a demonstration for a big county event. Again, not a lot of engineering here, but enough to get them thinking that this thing called science is not just showing up every day to do cool experiments, but that their work is compiled into a larger project to solve a problem or meet a demand in the community. More on this in Undo.

It’s no surprise that I love music and incorporate it in many places of teaching, learning and life. I discovered Symphony of Science (thanks NSTA Community Forum!), but I’ve never seen results like when I played Donovan’s Mellow Yellow on Friday. It wasn’t for instruction, but as a way to pleasantly enter the class and get them going, while I for once stood in one spot stapling materials, casually greeting folks as they walked in. I’m normally running around, scrambling to get ready for the next group. The idea came to me, well, because I woke up with it in my head and thought I’d try something new. Sure enough, the mellow mood changed the energy level as soon as they walked in. Sixth grade teachers are popular for using hummed tunes to get the attention of the class, that the class then finished as a way of total recall response. Guess I’m in now, and we now have Mellow Yellow as our new call-and-respond method, added to ‘shave and a hair cut, two pence!’. 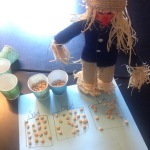 It was also a great week to incorporate levels of cognition into discussion using popcorn kernels as molecules in states of matter. This simple activity (not in the curriculum, I added it) really clicked with the students, especially those that weren’t distracted by the urge to throw them across the class (probably why this is not in the curriculum). While they and Francis made these quick models, I circulated around grabbing a popcorn kernel and moving it from one state to the other. “Can this molecule be here (solid)? Here (liquid)? What is an example?” Usually the answer was water, as H2O can of course exist in all three states. This is an easy Knowledge or possibly Comprehension based Q&A process, but how can we scaffold through higher-level cognition levels to result in discourse? Here are some of the questions I came up with:

Comprehension: Explain how this molecule can be in both solid, liquid and gas boxes?

Application: What has to happen for this molecule to go from one state of matter to another?

Evaluation-ish: What is the evidence that a change occurred?

Synthesis-ish: Explain how you would build a model showing how materials change from one state to another and how they differ from one material to the next (for instance, compare salt water and fresh water).

Safety. Safety First. No science teacher needs to be reminded of this, and understanding state laws for running a science lab are part of science education. What are your horror stories in this topic? What can we learn from each other as we progress on our science education journeys with extremely hyper students playing with dangerous lab equipment? Here’s my story. A student claimed that leftover borax was on their (newly cleaned) desk and wiped it in their eye. It was red, so I washed it in the eye-wash station while I lectured the class on the importance of following the teacher’s instructions and the state law of being in this scientific laboratory. The student was nowhere where they should be when the incident occurred, we were not doing any lab that used borax (it was stored on a side counter for a later activity) and was obviously not wearing goggles, and I was occupied separating two students who were rough-housing when said incident occurred. I used it as a teachable moment to stop and lecture each and every class. We’ll be revisiting our safety contracts first thing Monday. Like all teachable moments, it was harsh, but the opportunity to make something serious seriouser and crystal clear was seized.

It’s an awkward time of year for my role in this department. We are now in the process of identifying individuals we will be conducting action research on for our semester’s goals in Student Learning Objectives to meet International Baccalaureate status. I’m enormously interested in being involved in this process and the success of the students and campus, but my assignment is not for this entire semester. As a replacement teacher, I will be passing along my notes of all students to my own replacement. My heart kinda broke when I realized that, and I worry about my students for the rest of their sixth grade science adventures (not that they won’t be in very capable hands). I write this here, in results, because I suspect I will be involved with these and other campus-wide initiatives moving forward, reporting results of students’ learning.

My wish, and nightmare, came true. Remember the crystals with Borax? I woke up one morning realizing I had to create this to be a one per student activity, even though that ship sailed last week. My undo became a do, albeit another very messy week and some issues with materials management among our team. Yet, it worked out AMAZING! 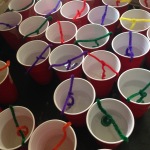 Because students had already seen a demo, they knew what was going to happen, so we used that as an opportunity to practice compiling their journal information into the 18-page Special Effect Internship proposal that otherwise would have been overwhelming for them. Every student has now had the same opportunity, and a crystal to show for it.

Most of my media has been linked above, with the exception of a great bee video on scientific updates with HHMI Biointeractive. For my Special Effects Internship, I’m using Life of Pi‘s special effects as the example because I want to hopefully highlight the bioluminescence of phosporescent bacteria, like what I saw in Puerto Rico’s Mosquito Bay. I’ve been tasked by my team to head up the examples (the team hasn’t done this summative assessment before). I’ll be sharing results later, and right now I’m compiling examples of videos that are helpful for students in Google Classroom. Wish me luck!